The Patty Hearst Kidnapping, Mind Control, and the Secret History of Donald DeFreeze and the SLA

Forty years after the Patty Hearst trial of the century,” people still don’t know the true story of the events.

Revolution’s End fully explains the most famous kidnapping in US history, detailing Patty Hearst’s relationship with Donald DeFreeze, known as Cinque, head of the Symbionese Liberation Army. Not only did the heiress have a sexual relationship with DeFreeze while he was imprisoned; she didn’t know he was an informant and a victim of prison behavior modification.

Neither Hearst nor the white radicals who followed DeFreeze realized that he was molded by a CIA officer and allowed to escape, thanks to collusion with the California Department of Corrections. DeFreeze’s secret mission: infiltrate and discredit Bay Area anti-war radicals and the Black Panther Party, the nexus of seventies activism. When the murder of the first black Oakland schools superintendent failed to create an insurrection, DeFreeze was alienated from his controllers and decided to become a revolutionary, since his life was in jeopardy.

Revolution’s End finally elucidates the complex relationship of Hearst and DeFreeze and proves that one of the largest shootouts in US history, which killed six members of the SLA in South Central Los Angeles, ended when the LAPD set fire to the house and incinerated those six radicals on live television, nationwide, as a warning to American leftists.

Brad Schreiber has written or co-written seven books, including Becoming Jimi Hendrix, selected for the Rock and Roll Hall of Fame Library. He created the truTV series North Mission Road, based on his book, Death in Paradise. He also writes for the Huffington Post and was a National Press Foundation fellow. Schreiber is a visiting professor of nonfiction at University of Wisconsin, Madison. He lives in Los Angeles.

“Revolution’s End is a stunning and chilling expose of one of the most bizarre political chapters in my lifetime—the rise of the Symbionese Liberation Army and the kidnapping of bad-girl heiress Patty Hearst. Brad Schreiber presents a compelling new case that the SLA was a creation of the police state to infiltrate, subvert, and destroy the growing radical movements of the period.”
—David Talbot, founder of Salon.com and bestselling author of Season of the Witch and The Devil's Chessboard

“Revolution’s End is a gripping read—a persuasive, well-researched and detailed interpretation of what is known about the SLA kidnapping of Patty Hearst.”
—Peter Dale Scott, author of The American Deep State: Wall Street, Big Oil, and the Attack on U.S. Democracy

“This book careens to its bloody ending with all of the inevitability of a train wreck. Schreiber won't let us take our eyes off it. He ignites the past in chilling detail and at the same time shines an uncanny and unsettling light on who we are today.”
—T. Jefferson Parker, three-time winner of the Mystery Writers of America’s Edgar Award

“‘The Symbionese Liberation Army’ was a counter-revolutionary front, carefully created...to infiltrate and discredit the authentic leftist movements then alive and well in California. Such is the unhappy, fascinating truth Brad Schreiber tells in Revolution’s End—a careful book, and one as necessary as it is disturbing, not just for all it teaches us about what really happened with the SLA in California, over forty years ago, but also—and especially—for what it teaches us about America today, and all the world, post-9/11.”
—Mark Crispin Miller, professor of media studies, New York University and author of Loser Take All: Election Fraud and the Subversion of Democracy, 2000–2008

“Really incredible... It’s a fascinating book you’ve written. I think it’s important that we study these moments in recent history so that we can have a better view on what’s happening in today’s world.”
—Tyrel Ventura, Watching the Hawks, RT America Television

“The book comes across as a solidly researched, well-documented history.... It does make an interesting addition to the literature on the Hearst kidnapping, radical groups in the 1970s and the hidden corners of American history.”
—David Pitt, Booklist

“Even more fascinating than the publicly known story of the SLA, Schreiber’s text takes an extendedand serious look at a possible deep narrative regarding the genesis of the SLA...Even more so, though, is the detailed and convincing examination he provides the reader of how police agencies can and do work to destroy the political enemies of the corporate state.”
—Ron Jacobs, Counterpunch

“Revolution’s End is a careful examination of the relationships among various government intelligence, police and prison agencies that colluded to create a synthetic terror group called the Symbionese Liberation Army (SLA)… Schreiber’s exposure of government involvement in the creation of the SLA is nothing short of explosive… a remarkable book.”
—Kara Dellacoppa, Dissident Voice

“With poise . . . Schreiber connects activities in the LAPD, FBI, and CIA to prisoner programs within the California Department of Corrections, leading to then-Governor Ronald Reagan’s cabinet . . . this is fruitful territory.”
—M.W. Lipschultz, Los Angeles Review of Books 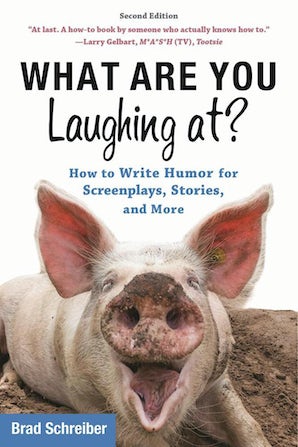 What Are You Laughing At?

How to Write Humor for Screenplays, Stories, and More